Cobb County has a pair of dedicated Heavy Rescue Squads. Squad 7, currently assigned to Station 7 off Hurt Road, services the South-end portion of Cobb County. Squad 16, which is assigned to Station 16 in Kennesaw, serves the North-end of Cobb County. Both Squads are assigned with at least four Technical Rescue Technicians on any given shift, with a Lieutenant serving as the Officer in Charge on Squad 7 and a Captain as the OIC on Squad 16.

The Public Safety Command Unit, which goes by the call sign 900, is assigned to Station 8 and is staffed 365 days a year by a certified firefighter. The Command Unit is dispatched to all working Commercial Building fires, active shooter events, Hazardous Materials events, and any other event an Incident Commander may deem appropriate.

The Cobb County MedOps is a highly-specialized team composed of paramedics and EMTs who, when called upon by various law enforcement agencies in Cobb County, serve as the tactical medics for hostile events. MedOps serves with the Sheriff’s office, Squad, MCS and more responding agencies and is dispatched to various active shooter events. MedOps is currently assigned to Station 13, in West Cobb County. Paramedic members of the MedOps team receive a 10% pay incentive, while EMT members receive 5%.

Cobb County is host to a pair of Hazmat teams. Hazmat 22 is assigned to the South-side of the county, while Hazmat 8 is assigned to Station 8 on the North-end of the county. During a large-scale Hazmat incident, the two teams work together. Along with housing the Hazmat 8 truck, Station 8 also houses the Decontamination trailer used for large-scale Hazmat scenes. Members of the Hazmat Teams receive an additional 5% pay incentive.

Cobb County is home to a pair of Aircraft Rescue and Firefighting (ARFF) trucks, which are assigned to Kennesaw’s McCollum Airport. Members of Hazmat 8 are assigned to the apparatus on a needed basis. The ARFF trucks have unique radio call signs, being named Tomahawk 1 and Tomahawk 2. 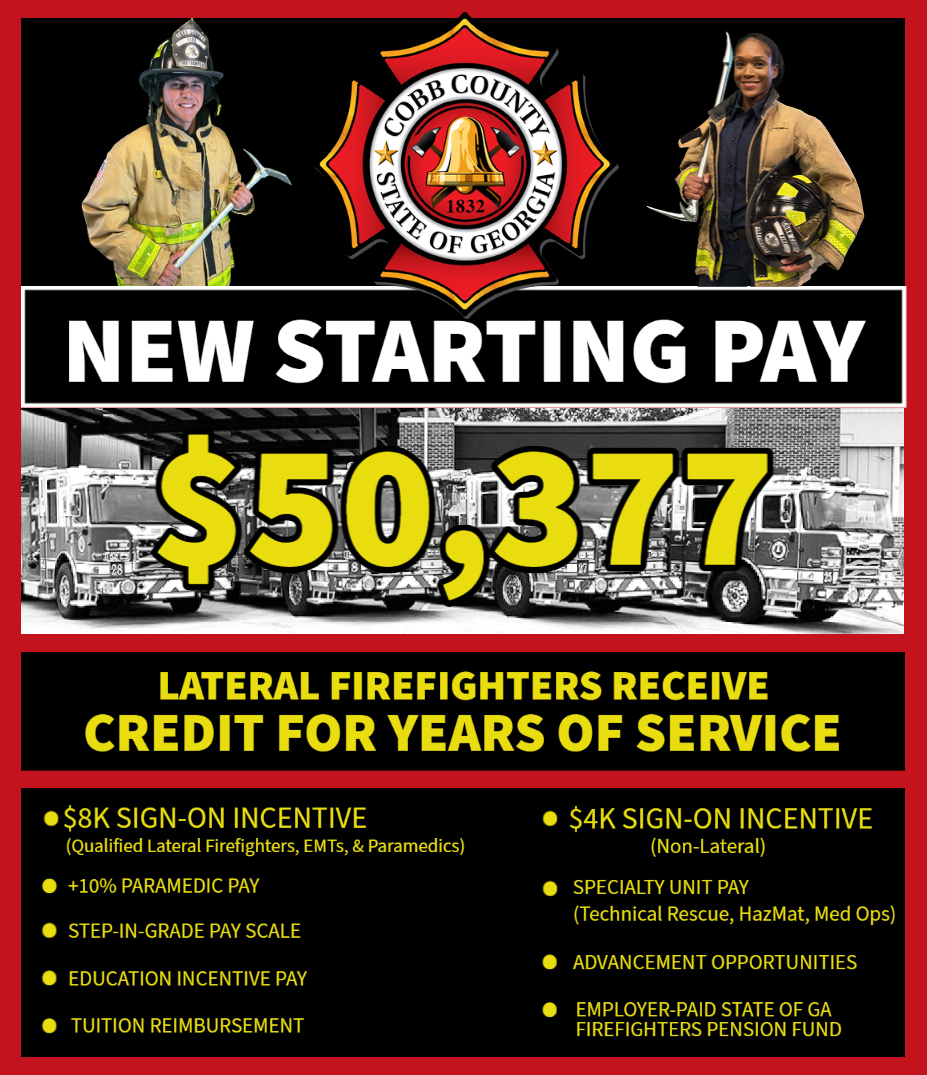